A Lasting Friendship Through the Tragedies of the Holocaust

In the late 1940's, cousins Rachelle Malcmacher Korland and Anne Malcmacher Adelman; Fran Dorfsman Spike; Edie Miller Block; Ruth Bergrin Gordon; and Shirley Frum Cohen were born in Feldafing, the largest “Displaced Persons” (DP) camp in Germany created for Holocaust survivors. For nearly 70 years, these six women have remained friends. In fact, at least once a month, these Jewish Clevelanders get together for lunch, dinner, or just to talk. 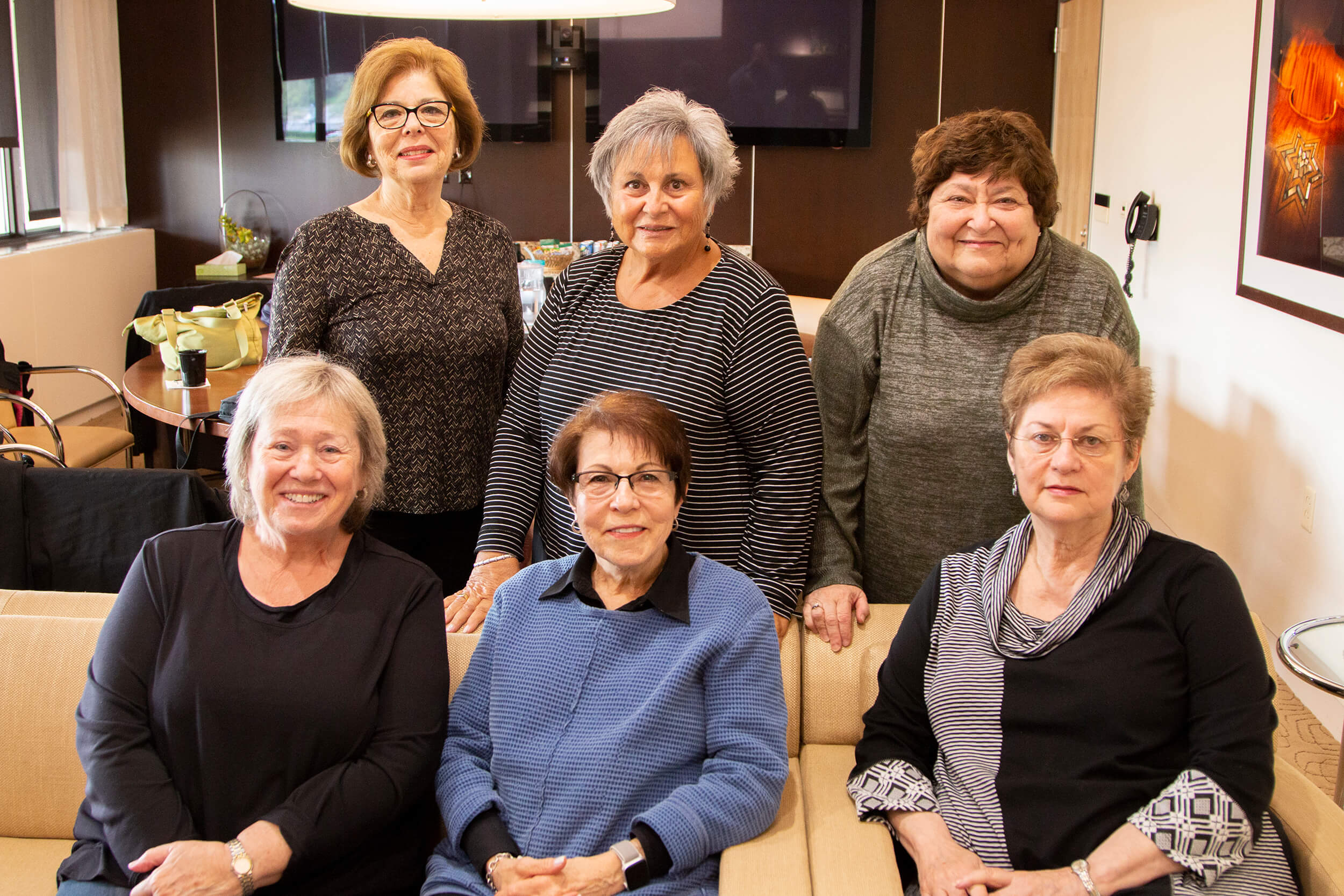 How did the closeness of your families help you deal with tragedy of the Holocaust?

Anne Adelman: We’ve always been together, from the moment our parents were taken to the DP camp. We bonded in the camps through our parents. Most of the people there lost their entire families. We all became a very tight-knit group. Everyone had similar backgrounds. We were the first ones born there, but the German government wouldn’t recognize the area so on our passports it says ‘Stateless.’

Ruth Gordon: Everyone was connected. Our parents all had jobs there. Shirley’s father was a driver, my father delivered milk, Edie’s dad delivered seltzer, Rachelle’s dad was a butcher.

What were the circumstances of how you got to Cleveland?

Edie Block: My family was specifically sponsored by a Jewish Cleveland family; We didn’t know them at the time, but we were chosen by them. When my father came here, he was overwhelmed with all the tall buildings and the hustle-bustle. He never quite adjusted.

Ruth Gordon: My mother had an uncle who was living here and we were sponsored by him. Jewish Family Services helped my parents get jobs.

Anne Adelman: Our parents were lucky enough – through a sponsorship from the Cleveland Jewish Federation to be brought to Cleveland. They gave my parents a place to live, furniture, found them jobs. And they started a life in Cleveland.

Rachelle Korland: My mother used to tell me a story that there was no city that would take four siblings who were married in the camps and now had four children (Anne’s father and two other siblings). So the two Malcmacher families went to New York and the other two went to Cleveland. My mom vividly remembered saying ‘What’s a Cleveland?’ My father was a shoemaker in Europe, but they didn’t need any shoemakers in Feldafing, so he became a butcher – and he continued that when he came here to the US. Federation was able to help us with our first place to live and helped my father find his first job.

Shirley Cohen: Our story is a little different. We were one of the last families to leave Feldafing. We had no family who survived the war and no sponsors to bring us to the United States. We were finally sponsored by the JDC (American Jewish Joint Distribution Committee) and took a boat to New Jersey. My father was handed $15 – $5 for each of us – and we were taken to a temporary home. My father used that money to buy sardines for us. Both my parents found jobs and began to work. Through friends of the family, we ended up in Cleveland.

“Federation has had a big role in continuing to make sure that those people and those lives are not forgotten.”

What was life like for you growing up in Jewish Cleveland?

Rachelle Korland: Once we all arrived in Cleveland, most of us lived near each other in apartments between Parkland and Lynn Drive in Cleveland. Our parents enrolled in English classes at Glenville High School.

Fran Spike: I remember our parents learning English. You had to learn the language to survive. We all went to school and began to pick up the words faster than our parents. The children started to become the main translators for our parents. For example, we’d accompany them to doctor’s appointments to help them understand what was wrong. We really didn’t know any different. The first thing I remember doing was walking to Arlington Library (now, Glenville Library) and getting a library card. My parents used to say how everything was taken from them, but living here in Cleveland, no one could take away my education and that was most important.

Ruth Gordon: When us girls hung out, we went to Lake Plata Park. But all the families would hang out at the park on Sundays. Everyone would sit down at the picnic tables for family day. This was our extended family. And that is why local survivors formed the Kol Israel Foundation – to get together and celebrate the happy times, but also remember the sad times.

Shirley Cohen: Sundays in the park was familiar, and it was fun. It was comforting for us because our friends became our family. I’ve learned that lesson throughout my life. I can remember my father couldn’t close his gas station until 2 pm and we’d join everyone later in the day. By the time we got there, everyone else was eating.

How have you remained friends over the years?

Anne Adelman: It was through our parents staying friends. We were always together and stayed friends, and still have for 70 years. We didn’t know any different. You just didn’t disappoint your parents.

Fran Spike: It was through them we became friends. But together, we have become a family. Whenever we were late, or misbehaved, or did anything that they didn’t like, we would hear, ‘For this, we survived the Holocaust? I didn’t come to America for this!’

Edie Block: We all remained friends throughout our childhood, teens, and adulthood. It was just that bond we all had. Everyone came to our weddings – and that was more for our parents. All of their friends were there because most of them never had weddings in the camps, they just were married. Not only have we remained friends, but our husbands have become friends with each other, too.

Rachelle Korland: The thing that really helped our parents make it here in America was the Kol Israel Foundation and the Holocaust memorial at Zion Memorial Cemetery. We were able to keep that connection from where we came from. It was our extended family. Federation had a big role in building that, too. In order to get the ashes and bones, the Federation worked with the Polish government. The political nightmares were endless, but they put it all together.

Fran Spike: And the Federation has had a big role in continuing to make sure that those people and those lives are not forgotten with the annual memorial we have.

Shirley Cohen: It meant everything when Kol Israel built the monument. It meant when you wanted to say kaddish (prayer), you had a place to go. It was a physical place we could walk to in order to pay our respects to the six million lost in the Holocaust.

How can stories like yours and Holocaust education continue?

Rachelle Korland: My mother used to speak to younger students in schools about her survivor story. She recently passed away and I got an email from someone who she spoke to years ago. He wrote that her story changed his life – he went on to go to graduate college and became successful. I will always treasure that letter because I know she was so proud of the work she did to tell her story. I hope that type of thing can continue. We need to tell their stories, so it doesn’t happen again.

The Jewish Federation of Cleveland honors our local survivors and remembers those who perished during the Holocaust.