Meet Masha, an 11-year-old from Odessa, Ukraine. Masha loves being crafty – but not just with her friends from school – Masha volunteers at the Hesed Day Center creating arts and crafts activities for the elderly or staffing a station at a community charity event. 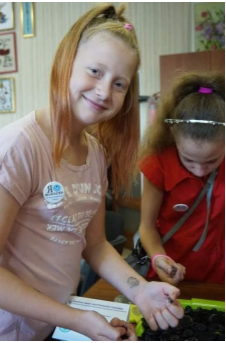 It was not always an easy life for her, though. A few years ago, bombs fell on her hometown in Eastern Ukraine. Her family fled for the safety of Odessa with only a few suitcases. Scared by the sudden changes, she was living in a place where she knew no one.

But one moment turned those fears into joy. “I remember a knock at the door. A woman came in with a menorah on her bright blue jacket and she was smiling,” Masha said. “She brought us food and clothing. And she kept showing up time after time. When our stove and water boiler broke, she brought over new ones so we would have hot showers and be able to cook food.”

This woman was a volunteer with The American Jewish Joint Distribution Committee (JDC), a Federation beneficiary agency overseas. Masha’s story is one of thousands of displaced families. And their story is made possible because of our community’s support.

For Masha’s family, that support meant rent subsidies and psychological counseling to help cope with war-related stress. Masha’s parents decided to stay in Odessa more permanently. Masha began making friends in school and at the JCC. But then tragedy struck again when her father suffered a fatal heart attack. JDC stepped in with a psychologist for Masha.

“I remember how it felt to receive help when we needed the help.”

After a while, she was able to lean on support from her friends young and old. She also started to give back herself. What really made Masha happiest is helping out at the Hesed. “I remember how it felt to receive help when we needed the help,” Masha recalls. “It really meant a lot. And now it’s my time to help out.”

“Her smile and energy made it clear; she loves to help people,” said her mom. “When Masha would say she’s going to Hesed, I don't worry about her. I know she will only learn good things there – how to be a good person and someone who cares”